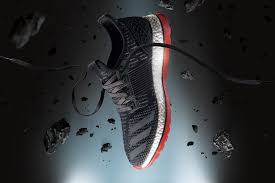 Great News! The shoe is in and well run in too. In short – it works. Lots of good stuff here but lots of old stuff here too. The preview note has been relegated to the bottom of this entry for it had some features already mentioned so no point repeating them.

That established, the ZG was a wondrous shoe. Straight out of the box it made me wonder what was so new about it? It looked a lot like the Ultra Boost. Sure the colour scheme was a bit different but same low-rise sock-like uppers, a generous boost foam sole teamed up with a grippy outer sole. Honestly, I couldn’t tell.

Well 50 kilometres later I can tell you my premonitions weren’t entirely unfounded. There is definitely a genetic link between the two styles but the ZG does two things better, or rather, different, than the Ultra. Firstly, it has more grippy uppers which means that although they fit like a sock, they hold the foot tighter. The middle section has these concentric bands of rubber which provide a structural spine that holds the shoe up and, in doing so, doesn’t let your foot collapse during a run either. The other thing the uppers help with is attracting less dust than the Ultra which meant my socks looked, well, a lot less dirty at the end of my sorties.

The second thing that the ZG manages to do is be light. It is exceptionally light, even with the leather-finished trims and a marbled heel support, and it is easy to take off in. The cushion does well to insulate the feet against injuries, the outer sole provides enough grip on the road and then some for light off-roading. The heel-to-toe drop is quite a bit but that’s almost standard in most shoes from the Boost line up with this level of cushion. The three reflective stripes on the front – camera stripes I call them as in a race they are the ones that will be easily captured by the lens, not the ones on the side – add a nice stylish touch: all in all a good all rounder.

Another point that separates this from the Ultra is that while the Ultra is more a unisex shoe (in build and shape) this is specifically designed for men, which means that there’s more toe room. The extra space may mean a hair’s width extra of a footprint on either side of the shoe, which can translate to better grip.

And finally, almost as a bonus, the shoe is seamlessly usable as an urban commute sneaker. The sombre uppers and tapered silhouette lend it well to pairing with jeans and shorts. The coloured sole adds just the right amount of sass without being too sporty. On my last work trip, I wore these to travel in and also used them for my runs which helped me bring down my travel shoe inventory by a factor of one which was a neat 25% reduction. Yes, I don’t travel shoe-light.

Again, like with the Ultra, this may not be the shoe you clock your PB in but it might just be the shoe that you get in all your training in to eventually shave those seconds off your standing track record.

As to how to choose between this and the Ultra, it could be a close call and it might come down to colour preferences and other such trivial details in which case Ultra would win hands down. But, even if ever so slightly, I prefer the ZG to the Ultra, if only for the added stability and grip that the shoe design provides.

PROS: Super cushioning and grip for training and long runs.

There is always an inexplicable sense of excitement when a new running shoe makes a debut. It’s like suddenly one has new-found hope that maybe this will be the pair that shaves a minute off my Personal Best (PB). No? Well, never mind then…just enjoy that there is a new sneaker in town and it has a funky coloured sole.

For the rest of you who will find this launch a solid ‘boost’ (yes, I did that on purpose) to take them for a long slow spin on the weekend, well, even as you read this, the Adidas PureBoost ZG is ‘racing its way’ (sheesh, I really must stop!) to a store near you. ZG stands for “Zero Gravity” so definitely expect a light shoe here.

I am yet to try the shoe and it will be a good 50-odd kilometres before I mention anything about comfort and fit. For now, all I know is it has the same patented The Boost mid-layer cushioning. The cushion, if you have used other Adidas shoes provides a responsive cushion that’s bouncy without being squishy.

The knitted uppers remind a bit of the Ultra which was (is) quite a successful running shoe. The funky coloured stretch-web outer soles are a playful touch.

What does make this launch unique is that with the ZG, Adidas is focusing more on gender-centric running shoes. First it was the PureboostX for women and now this, which sort of completes the set. And both of these are completely different constructions ground up and not just a different colour palate that stereotypically define shoes for men and women.

So, come 19th March 2016, boys et a new toy to ogle over (INR11,999/-). Some stock shots follow. This is the black, white and red version. Another variant will be available in grey, white, and ‘solar slime’ (translation: shade of grey). And here are the hashtags in case you’re one of the privileged first few to acquire a pair. #PureBOOSTZG #adidasrunning